In 1976 Máiread Corrigan and Betty Williams were awarded the Nobel Peace Prize. They received their medals on 10 December 1977 at the Oslo City Hall in Norway. Máiread later donated her medal to the Ulster Museum, and you will now be able to see it on display. 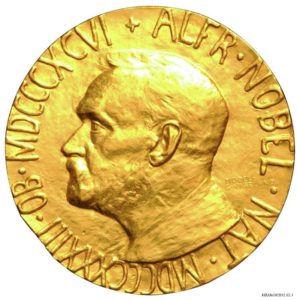 On 13th November at 3pm Mairead Corrigan Maguire, presented a talk at the Ulster Museum on ‘Building a culture of peace and nonviolence for the human family’. 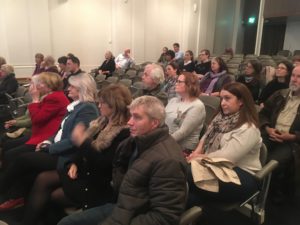 Part Of Mairead’s Speech can be read below:

“COURAGEOUS LEADERSHIP FOR PEACE AND DISARMAMENT”

Welcome to you all and many thanks for coming today,

This year we celebrate the 40th anniversary of the Peace People, and remember that on this date 40 years ago, the Peace People held a Peace rally along the Ravenhill Road.

After watching the Peace People film and seeing the shocking scene of violence and killings
We are reminded why we marched for peace and grateful how far we have come but also conscious of how much still has got to be done in building our vision of a nonkilling, nonviolent peaceful society in Northern Ireland.

In l976 when violence was at a shocking level, the emergency of the Peace People Movement calling for an end to all violence and a peaceful solution to our violent conflict played a historic role in helping end the violence and planting the seeds of peaceful dialogue eventual negotiations and a peace process. We offered an alternative to violence and encouraged everyone to be part of dialogue and peacebuilding. There was a 70 per cent decrease in the rate of violence and eventually when it was recognized that there would not be a military or paramilitary solution to what is a deep political/ethnic conflict, people began to move away from violence,

I believe we need to believe passionately in peace. It is our right. But we must also work to protect our peace against those who do not treasure it as a great gift. Peace is, I believe, not merely the absence of war, it is a state of mind. It is a neurological process, and the ability of each of us to find new ways of doing things and solving our problems, both individually and collectively. That is why we must all unite, co operate and collaborate together for the good of everyone in our society and in our world.

We need to recognize honestly the divisions and pain in our society and increase our efforts for forgiveness, reconciliation and peacebuilding. Building trust, fairness and equality, in our multi-racial society will take all our efforts. Supporting our politicians and Stormont institutions least they fall back into constitutional chaos, is very important for the stability and prosperity of Northern Ireland.

The future ahead with austerity cuts and ‘Brexit’ will be extremely challenging and our Political Leaders will be challenged to work together to find solutions with each other and for Northern Ireland. However, not matter how difficult we must encourage them to stay around the table, work together, as we cannot once more face becoming a failed political entity, the result of which could be a swift downturn to ethnic violence, yet again.

Women in Northern Ireland continue to play a great role in peacemaking and we need to ensure that the grass roots peacemakers – especially the women – are given their rightful place both at political and civil level, and are not airbrushed out of history. There should be a political commitment to the inclusion of women in Government on a 50/50 basis, and all their rights given recognition. Women who played a great role during the peace process, and continue to work at cross community work to address root causes of conflict, should be given recognition and financial assistance to do their work. The effects of brexit to civil society remain to be seen as EU has been financially a huge contributor to Northern Ireland peace building. The massive intimidation and heavy paramilitary presence, and the reassertion of male control, in areas of poverty and unemployment, means that women carry a heavy responsibility in family and community and this needs to be addressed by decisionmakers. Poverty and unemployment are only exacerbated by austerity cuts, etc.,

In conclusion, we can be deeply grateful that we do not have the horrific violence of ‘the troubles’ and have come a long way towards peace, but our peace is fragile and weak. We do not have a vibrant, exciting, positive peace and we still suffer from division, mistrust, from many forms of direct, cultural and structural violence. We have a militarized society and have yet to seriously question the arms industry and war machine. To change all this, we need to recognize the readiness to kill rooted in functions of the brain and in blessings by religious and secular faiths. Removal of these causes and replacement by noncling reverence for life requires mobilizing of the nonkilling spirit, and challenging assumption of lethality. We can change our culture from violence to nonviolence through education in nonkilling philosophy and an ethical framework based on International Laws.

In a way the Peace Movement whilst having done a lot, its work has really only just begun.

Get in touch with the Peace People